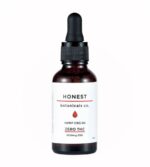 WHAT IS CBG?
CBG is often referred to as the “mother” of cannabinoids as it is the precursor from which other cannabinoids, like CBD and THC, eventually form. Though there hasn’t been much scientific research conducted on CBG yet, anecdotal evidence indicates CBG may feature antibacterial properties, as well as help increase dopamine levels, sleep quality and appetite stimulation.

BENEFITS OF CBG OIL
While much more research is necessary before CBG’s therapeutic properties are confirmed by health authorities, the limited number of studies that have been conducted so far indicate CBG may indeed confer a number of benefits for a variety of conditions, for example:

WILL CBG GET ME HIGH?
No. Cannabigerol (CBG) like cannabidiol (CBD), is mildly psychoactive but not psychotropic, and produce no intoxicating effects. At high doses, CBG can produce deep relaxation and euphoria, but for the most part these effects are not psychological.

For more on dosage, please read our CBD dosage guide. You can safely use approximately the same dosage as CBD oil.