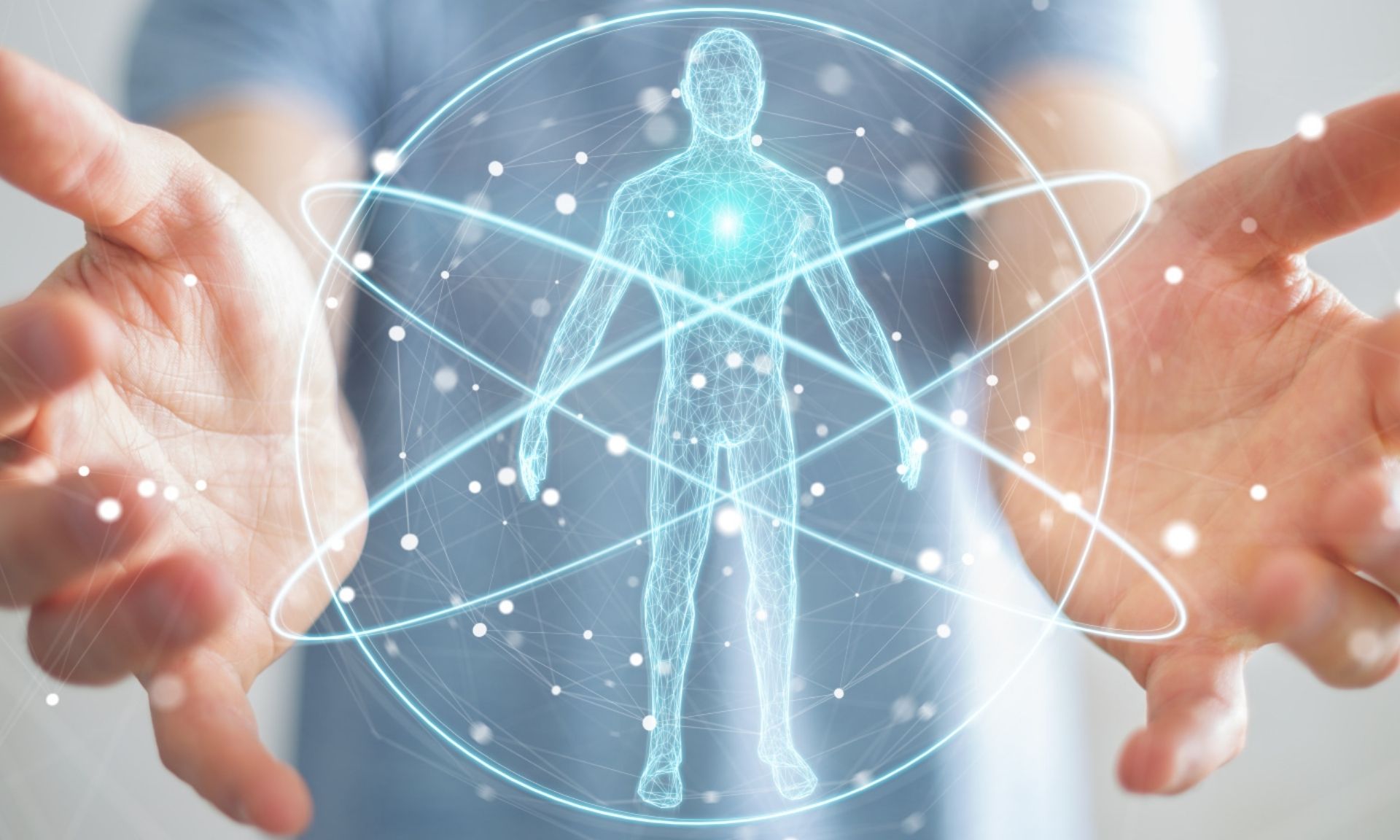 Since then, we’ve discovered that all animals, from hummingbirds to puppy dogs to sea urchins, have endocannabinoid systems of their own. 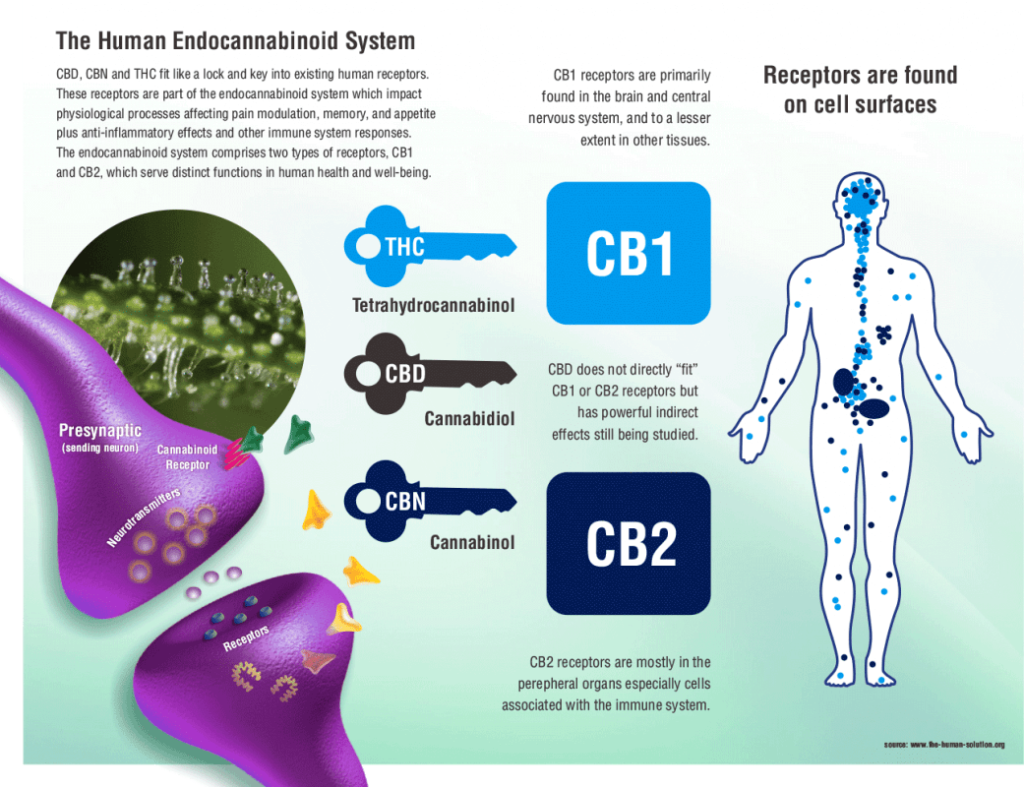 The ECS began evolving in living organisms around 600 million years ago. The ECS is complex and multifaceted. So much so that it will take decades to understand it fully. Interestingly, our ECS has the capacity to interact with cannabinoids produced by plants including THC and Cannabidiol (CBD), which can help maintain balance in our bodily systems.

The ECS: a primer

Dr. Rachel M Knox, MD, MBA analogizes the ECS this way; “You can think of it as a switchboard, functioning in and across all physiological processes and organs, and acting and reacting to external and internal stimuli, to direct, correct, and overall manage your health.”

“From embryonic development to immuno-surveillance, there is not a single function in your bodies that is not somehow influenced or modulated by this system.”

Scientists researching the effects of cannabis on the human body began discovering the outlines of the ECS in the 1960s and 70s, but it wasn’t until 1992 that Raphael Mechoulam and National Institute of Mental Health (NIMH) researchers William Devane and Dr. Lumir Hanus discovered the first endocannabinoid. Since then we’ve discovered that the ECS is present throughout the entire body and influences every system, process, and organ within it.

The ECS is made up of four primary components:

Put simply, the main job of the ECS is to maintain balance. This is much more important than it may sound at first. That’s because we now understand that endocannabinoid dysfunction—which leads to various long-term physiological imbalances—is the precipitate to most chronic diseases.

There is a key different between the two types of messenger systems. Neurotransmitters like serotonin, dopamine, and norepinephrine are synthesized in advance, stored in vesicles, and are released from the presynaptic cell in response to stimuli. These neurotransmitters cross the synapse and land on postsynaptic cells, causing them to activate.

Endocannabinoids differ in numerous ways. First, they are manufactured on demand, not stored. Endocannabinoids are also hydrophobic, so they can’t travel far in the body. That means endocannabinoid effects are highly localized. 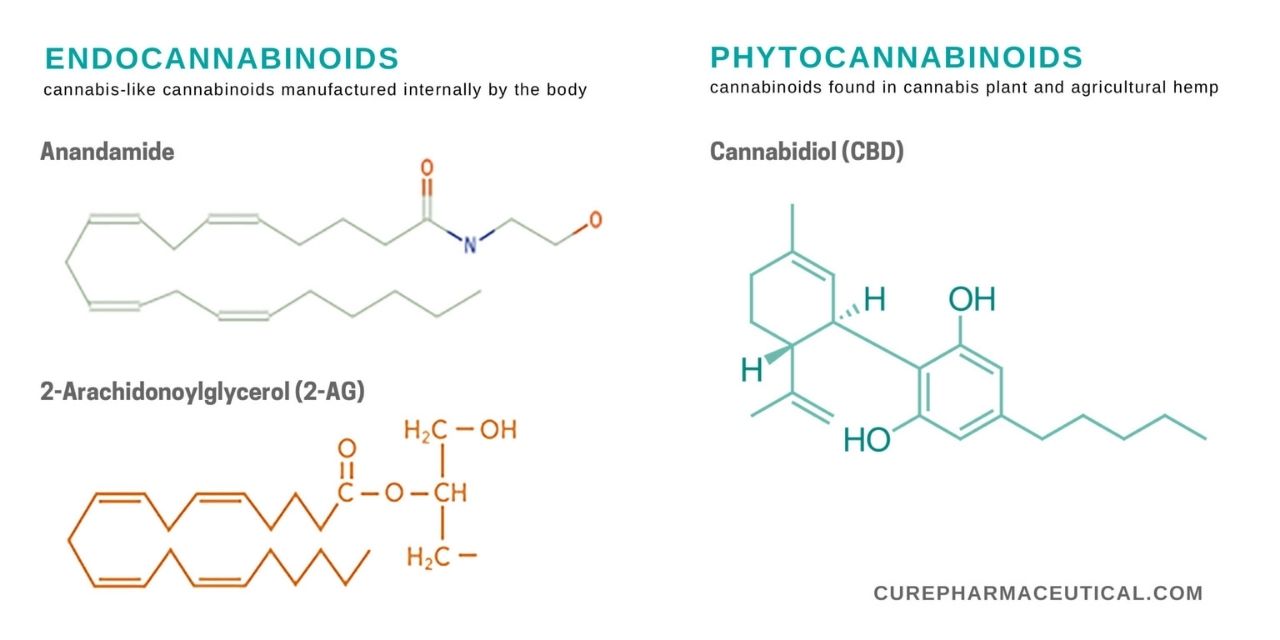 Anandamide gets its name from the Sanskrit word for bliss: “ananda”. Anandamide, also known as the “bliss molecule,” can be found throughout the ECS and is involved with memory, pregnancy, appetite and much more. It’s also responsible for the “runner’s high” you experience after strenuous exercise. So, put those myths about endorphins to rest, anandamide is what puts the “high” in “runner’s high!”

Anandamide’s sister molecule, 2-ArachidonoylGlycerol, let’s call it “2-AG,” is no less important. This is the molecule responsible for that feeling of contentedness after an orgasm, and has been linked to emotional states, cardiovascular health, and as a protective against seizures.

Other endocannabinoids we know about include n-arachidonoyl dopamine (NADA), and virodhamine (OAE). 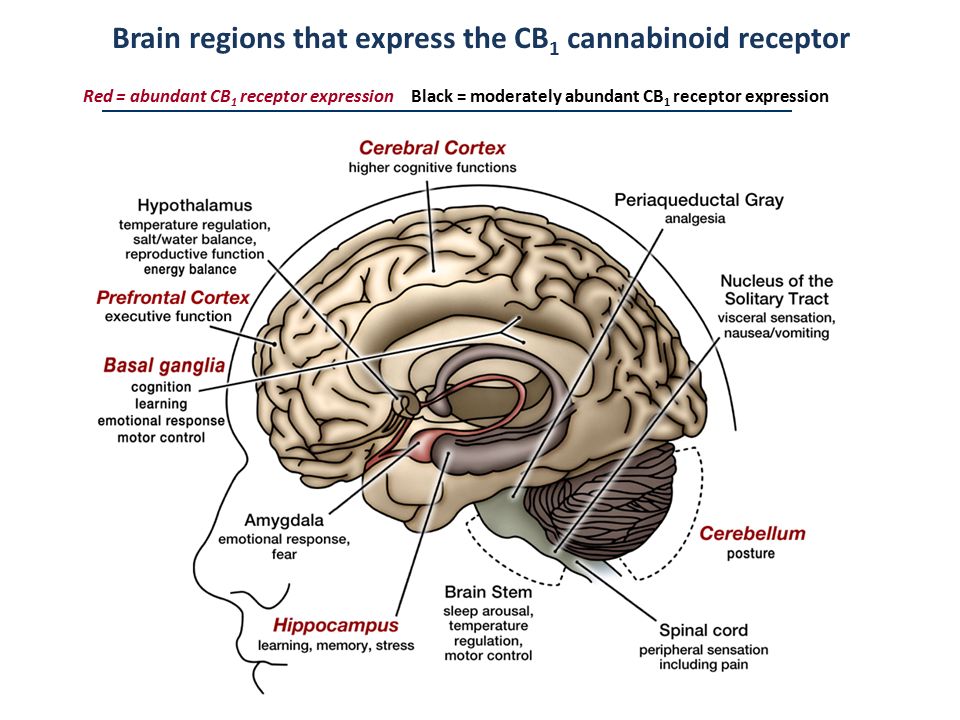 Next up: CBD receptors

Our CBD receptors are distributed throughout our bodies. These receptors sit on cell surfaces, waiting for specific neurotransmitters to bind with them. Depending on the type of cell receptors they are on, the effects they produce can quickly impact everything from sensation to mood, to immunity and even consciousness.  The two main kinds of receptors in the endocannabinoid system are CB1 and CB2.

CB1 receptors are one of the most common receptors in the entire nervous system. These are essential for the healthy functioning of the brain.

They are found in especially high concentrations in the hypothalamus, hippocampus, and amygdala, as well as throughout the central nervous system, intestines, connective tissues, gonads, and various other glands. Depending on a receptor’s location, it may regulate your memory, mood, motor function or perception of pain. CB1 receptors are also the ones responsible for the “high” you feel from THC—those sensations and altered mental states are thanks to THC binding to CB1.

Some of the effects associated with activation of CB1 receptor include:

CB2 receptors are primarily associated with your immune system and occur most commonly in the spleen, tonsils, thymus; immune cells such as mast cells, monocytes, macrophages; B and T cells, and microglia. There, they help to regulate our immune system response to pathogens and our inflammatory response. For those using CBD or THC to treat the symptoms of a condition related to an overactive immune system, think asthma, arthritis, autoimmune disorders, allergies, inflammatory bowel disease and others; the receptor involved in dialing those symptoms down is CB2.

CB2 receptor dysfunction is synonymous with virtually every type of human disease; be it gastrointestinal, neurodegenerative, cardiovascular, psychiatric or autoimmune. CB2 receptors are also involved in liver and kidney function, bone and skin health, cancer, and even pain-related illnesses.

Enzymes: Making endocannabinoids on demand and breaking them down afterwards

CBD, keeping the ECS in balance

Since the discovery of the ECS in the 90s, thousands of studies have been launched so that we may begin to understand it. But the sheer size and complexity of the system means that, despite all the research, progress is slow. In addition, there are over 100 different varieties of phytocannabinoids — including CBD, THC, THCa, THCv, CBDa, CBN, CBG… and each one can interact somewhat differently with the CB receptors in your body.

One thing we’re learning is that the ECS can be thrown out of balance quite easily. An inflammatory diet, exposure to pollutants, and other stressors can make maintaining that balance a struggle. Fortunately, CBD can stimulate the ECS to promote homeostasis—an internal state of balance in which all physiological systems function optimally. 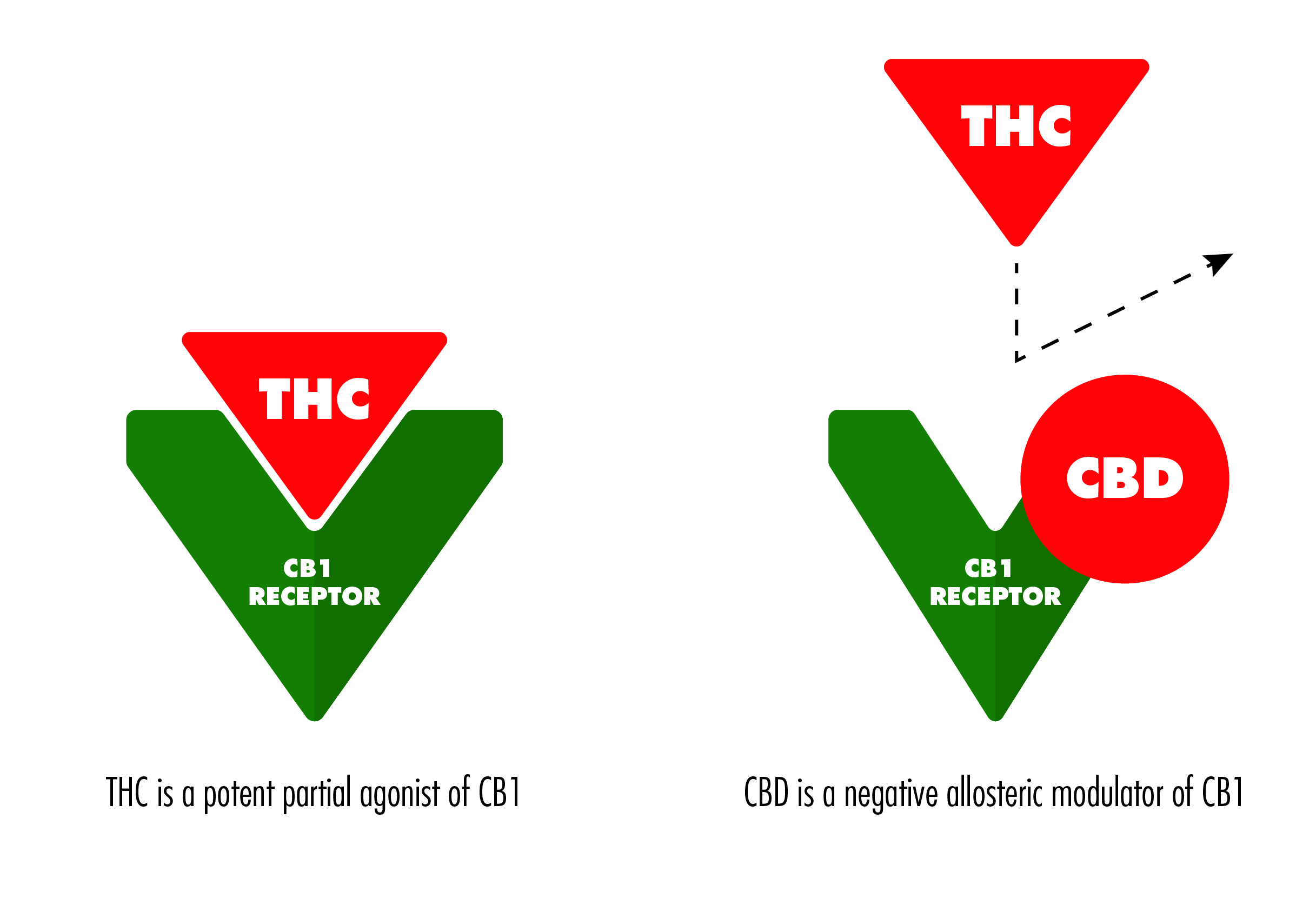 CBD also plays a broader role in the ECS. It can increase your natural levels of endocannabinoids and influence other types of receptors like TRPV-1, which are involved in regulating pain, inflammation and body temperature. CBD also inhibits Fatty Acid Amide Hydrolase. This action makes it possible to create more “bliss molecules,” resulting in more feelings of happiness and motivation.

Much more research into CBD, cannabinoids and the ECS is needed before we can use CBD with the precision and efficacy that modern medicine demands. Finding the right dosage for particular conditions is still a challenge. Nonetheless, CBD and cannabis medicines are showing themselves to be effective aids for a variety of conditions.

But beyond using cannabis medicine to promote homeostasis, there are other things you can do to help keep your body functioning optimally. Eat healthy foods and try to reduce your intake of inflammatory agents. This will boost your body’s natural production of endocannabinoids. Try to live clean, avoid pollution. Exercise and stretch often; exercise promotes health and reduces stress! Lastly, remember to smile and hug more, this is especially good for mind, soul and body. 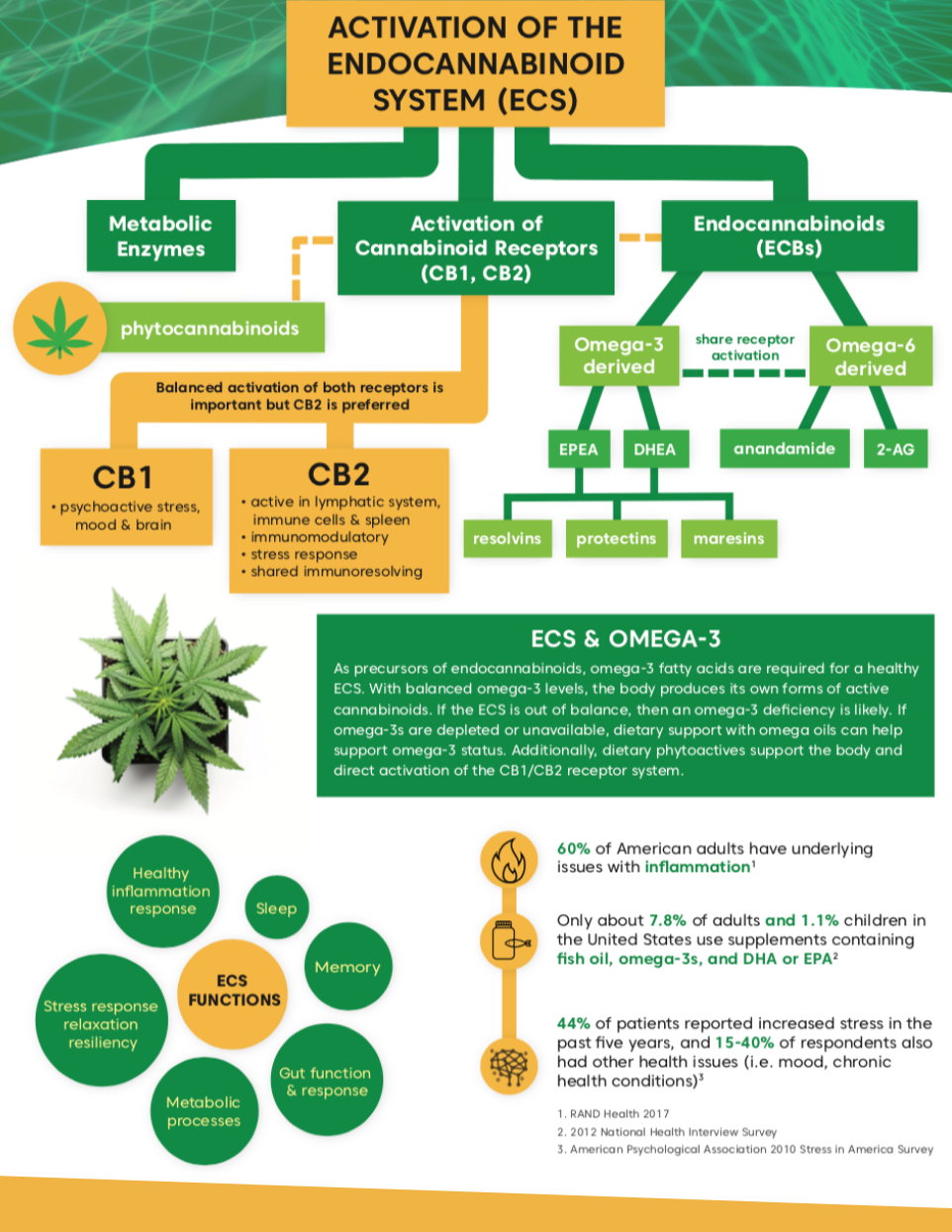