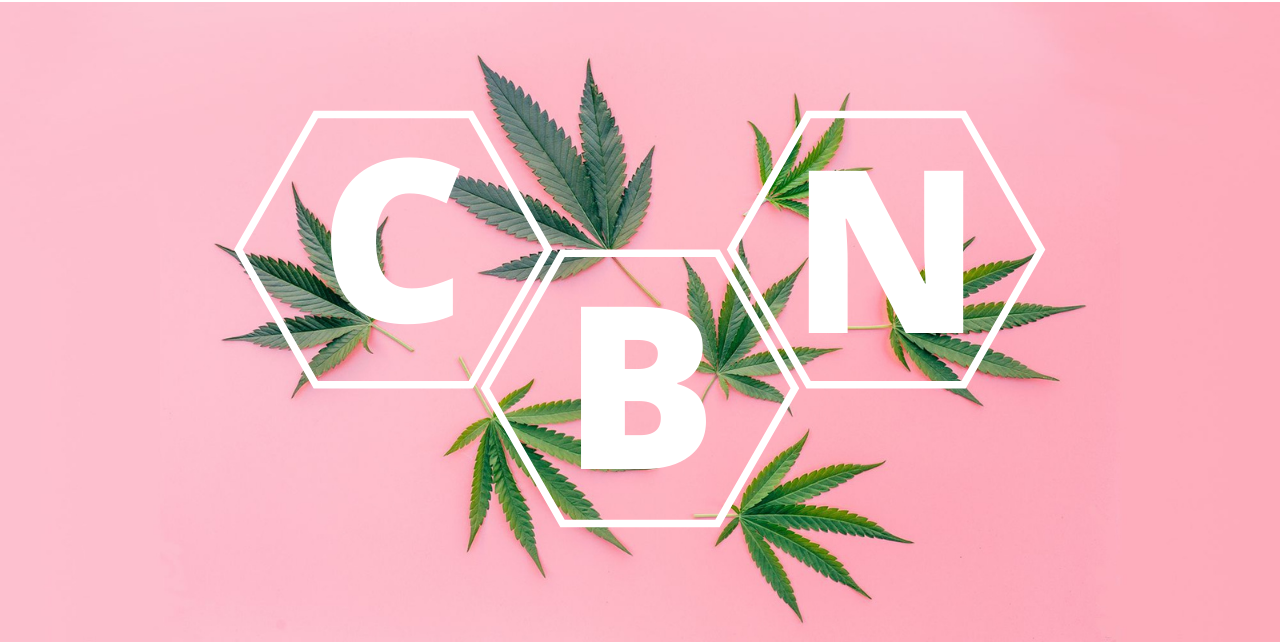 CBN, one cannabinoid among many

Cannabinol, CBN, is another cannabinoid produced by cannabis plants getting attention lately thanks to its therapeutic potential. The cannabinoids most people know about are THC (delta-9-tetrahydrocannabinol) and CBD (Cannabidiol). But, cannabis and hemp plants produce more than 100 other kinds of “minor” cannabinoids, like CBN. That’s not all. Cannabis plants also produce 300 more chemicals, including terpenes! A truly prolific plant! THC and CBD represent the lion’s share of the cannabinoids a plant produces, with minor cannabinoids like CBN, CBG present in only trace amounts.

CBN is sometimes referred to as “the sleepy cannabinoid in old weed,” by seasoned users who find that old weed stored in less-than-ideal conditions makes them sleepier.

Oddly enough, cannabinol does come from old weed. It’s what results from the oxidation and decomposition of THC. When cannabis flowers are exposed to heat and Co2, the THC in the flower converts to CBN. Compared to THC, cannabinol has only mild psychoactive properties.

“The pharmacokinetics of cannabinol seems to be in between 1/6 and 1/10 of the potency of the CB1 receptor (cannabinoid receptor type-1) that THC is,” says Zoe Sigman, a principal researchers at Project CBD.

This means that CBN could be considered mildly intoxicating. 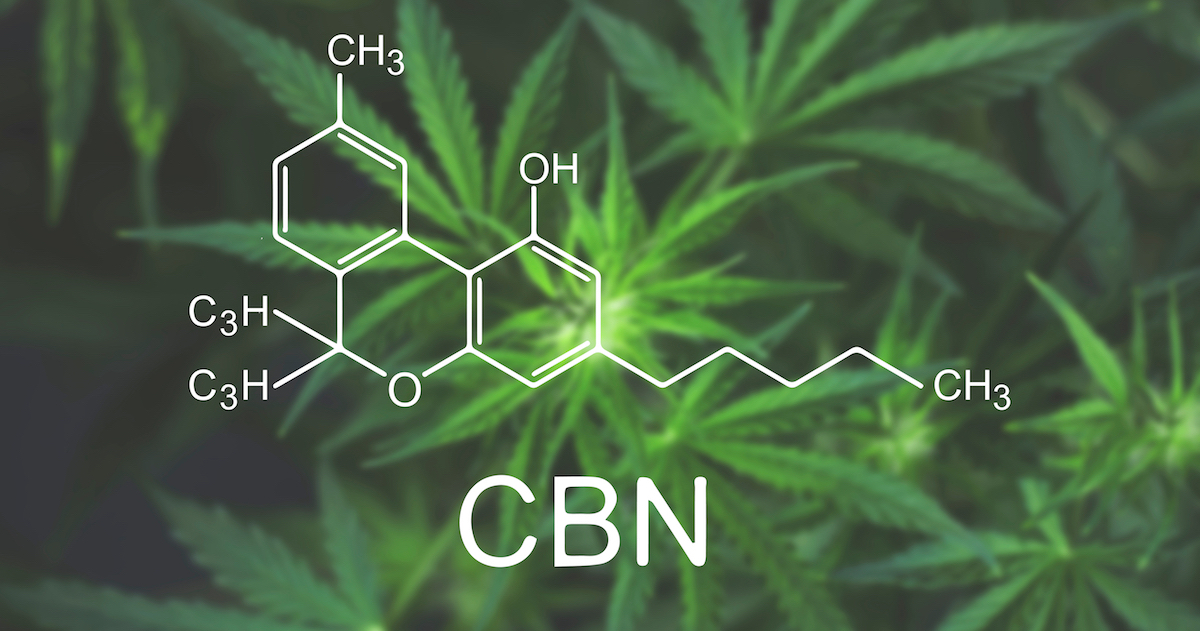 What are the potential health benefits? What is the evidence?

Cannabinol has already been associated with a number of medical benefits, but it must be stressed that the science on cannabinol is still very young. We’ll need much more research before we fully understand CBN’s true potential or are able to prescribe it like a prescription medication. Most studies conducted so far have been on lab animals. That being said, here are some of the potential benefits researchers have found so far.

Anti-Insomnia
Thanks to all the anecdotal accounts out there, cannabinol has garnered a reputation for being a potent sleep aid. Unfortunately, this reputation is somewhat in error.

The trick is that cannabinol does not work as a sedative alone. A 1975 study on rats and mice showed CBN enhanced THC’s sedative effects. This is why aged cannabis has earned such a reputation as a sleep aid. After cannabis ages, THC oxidizes and converts to CBN—creating the sedative synergy that puts people to sleep. In addition to that, aged cannabis also has more more sedating sesquiterpenoids—a class of terpenes.

Pain Relief
Researchers believe CBN may also kill pain, but through a different method of action compared to CBD and THC. CBD and THC bind with CB1 and CB2 receptors to produce pain-killing effects. Cannabinol does so as well, but as a weak, partial agonist of CB1 receptors. This means it can bind directly to CB1 receptors, but weakly—resulting in about 10% of the pain-killing activity of THC using this method. CBN makes up the difference by releasing peptides from sensory nerves, which also reduces pain.

Anti-inflammatory
CBN’s reputation as an anti-inflammatory isn’t as well established as CBD’s. However, A 2009 study indicated cannabinol showed potential for  treating inflammatory disorders like allergic asthma.

Anti-bacterial
Cannabinol is not alone among cannabinoids thought to be potent anti-bacterial agents. CBN tested on multiple antibiotic-resistant bacteria was found to be highly effective. Researchers believe that, in the future, CBN may prove useful to help combat methicillin-resistant Staphyloccus aureus (MRSA) bacteria. 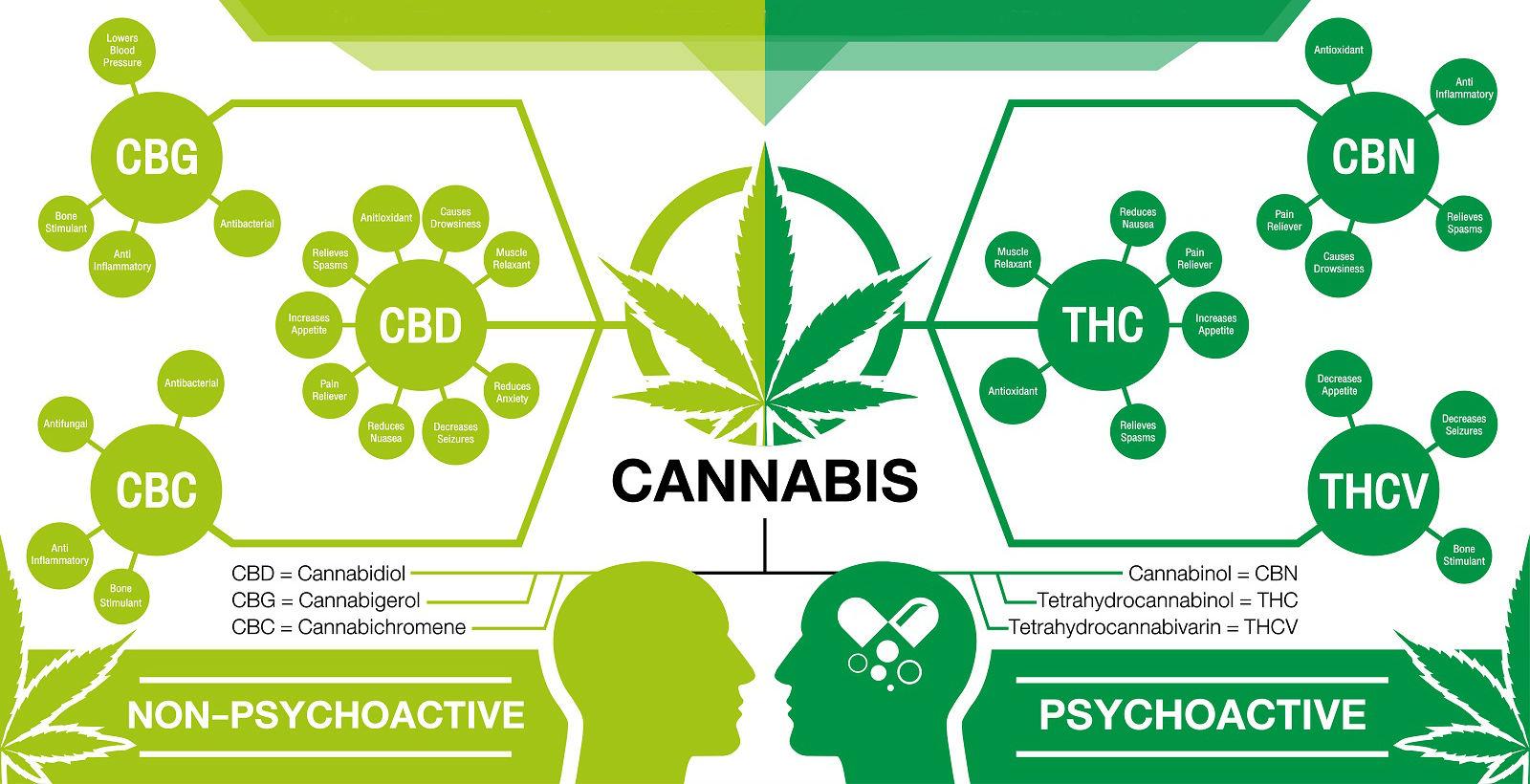 Anti-Convulsant
CBN may by effective for treating convulsive illnesses, especially when used in conjunction with CBD and THC. Studies from the 1970s showed cannabinol was a remarkably effective anti-convulsant.

Appetite Stimulant
A 2012 animal study found that rats given cannabinol enjoyed sizable increases in both how much they ate and how long they kept eating for. This opens the possibility of using CBN as an alternative to THC to stimulate appetite—but without the high.

Glaucoma
Although CBN hasn’t been shown to be superior to current glaucoma medications, another animal study found that CBN and THC were helpful in diminishing intraocular pressure—a leading risk factor for glaucoma.

All told, research on cannabinol is still in the preliminary phases. There are a lot of interesting results so far, but, most trials have been conducted on animals. Researchers have a long way to go before they can scientifically prove CBN is effective for any of the conditions mentioned above.

Does CBN really help you sleep?

As mentioned earlier, the idea that cannabinol alone is a powerful sedative is a myth born from misconception. CBN helps, but it doesn’t do so alone. In fact, what CBN actually does is enhance THC’s sedative effects.

Where does this misconception come from? The main reason is because cannabinol appears in older, poorly-stored marijuana. Over time, and with exposure to oxygen, THC degrades into CBN. When people smoke their old, poorly-stored marijuana, they notice it makes them far sleepier than usual. Thanks to this association between sleepiness and the presence of higher concentrations of CBN in old weed, people have assumed that CBN is a powerful sedative.

Not much research has been done on the topic, but one study conducted in the 1970s did shed a little light. Researchers tested CBN alone, CBN combined with THC, and THC alone. THC alone was found to make people a little drowsy, but this drowsiness increased when THC and CBN were combined. Cannabinol alone did not produce any drowsiness.

However, there may be more at play. Other chemicals might play a role in this plant-powered sedative effect.

“Pure CBN is not particularly sedating,” says neurologist Dr. Ethan Russo, “But it is typically found in aged cannabis in which the monoterpenoids have evaporated leaving the more sedating oxygenated sesquiterpenoids.”

In plain English: not only is there more cannabinol in aged weed, there are more terpenes as well, like the sedative oxygenated sesquiterpenoids mentioned by Dr. Russo.

It may be that the best sedative effects come from a combination of THC, CBN and sedative terpenes, not THC or CBN alone. 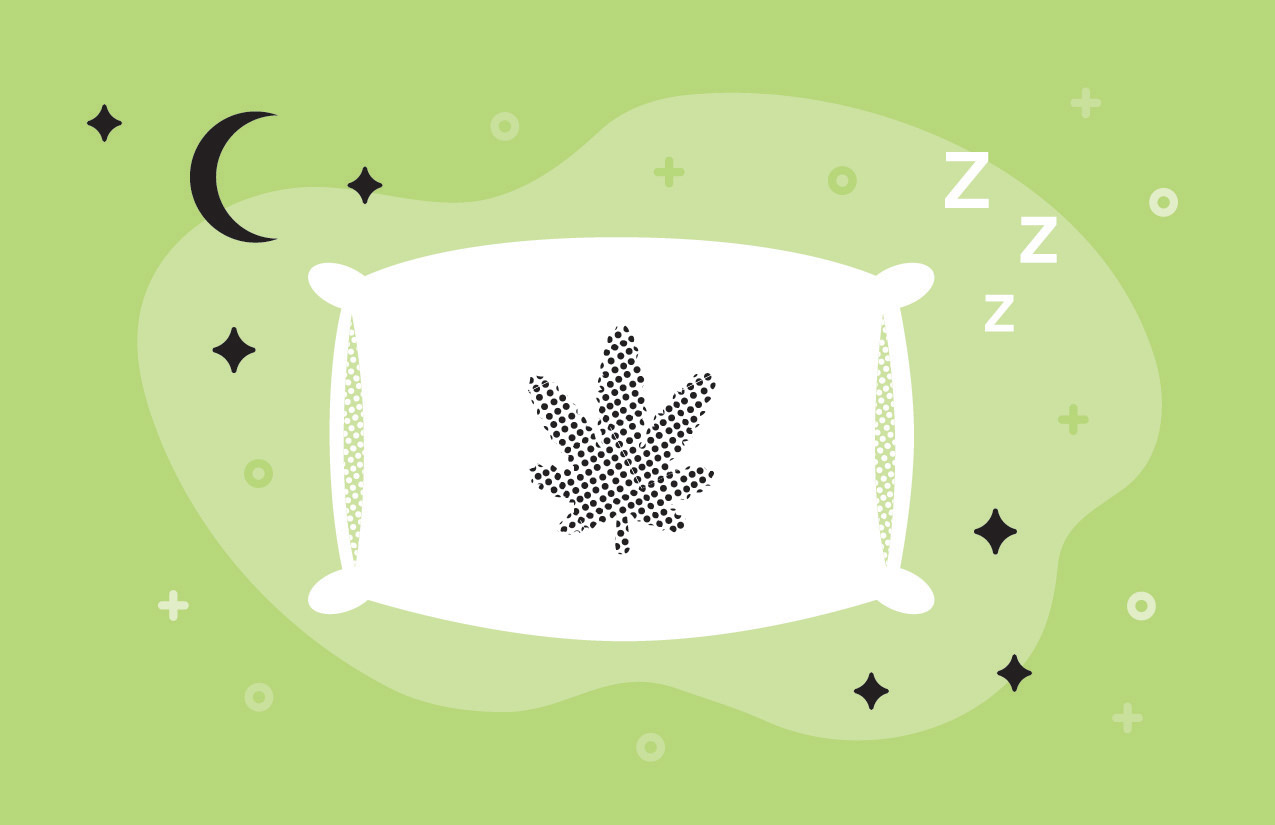 The question of CBN legality is a bit thornier in the US that it is in Canada. In the US, hemp-derived CBD is legal thanks to the 2018 Farm bill, however CBN, can be considered an analog of THC, which is a Schedule I substances under US federal law. In Canada, CBN—like THC and CBD—is legal for consumers to buy in accordance with the 2018  federal Cannabis Act.

Do your due diligence. Find out if cannabinol is legal in your jurisdiction before you try it for the first time. If THC is illegal in your area, cannabinol may be illegal as well.

How do I find quality CBN?

Cannabinol products are still a little hard to find. One, pretty low-effort, home-made way to get cannabinol is simply by using old cannabis flower you still have lying around. If you don’t have weed at home, you could also go buy some flower at the dispensary. Just leave it out exposed for a week or two at home somewhere dry.

For those who enjoy the challenge of aging their own weed, look for strains prone to producing higher cannabinol levels like Purple Sour Diesel, Jorge’s Diamonds,, Strawberry Haze,  A-Dub, Amsterdam Flame and others.

Be careful when you use cannabinol. It’s important to know whether the product you consume contains THC. Although CBN alone is non-intoxicating, it can actually intensify a THC high. A product with a very small amount of THC, 0.5% or less, probably won’t affect you much, if at all. If you prefer to avoid the high, avoid the THC.

Since other cannabinoids, like CBD, can interfere with medicines the same way that grapefruit does, it’s cautious to assume CBN can do the same. If you are on any prescription medications, talk to a medical professional first, before you try cannabinol.

One way to use cannabinol more safely by using a topical product, like a cream or balm. Cannabinoids applied topically don’t usually make it into the bloodstream. Your skin has more endocannabinoid receptors than any other organ. That means a topical cream will bring more CBD/CBN to receptors in the area applied. This allows for CBD and CBN’s anti-inflammatory properties to take effect without entering the bloodstream. 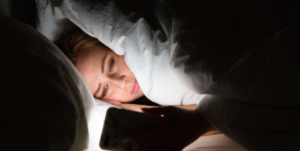 CBD and sleep hygiene have a symbiotic relationship. It is well known among the CBD community that CBD has proven capable of potentially 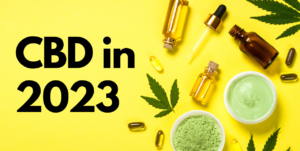 The Future of CBD

With a new year just getting started, is natural to question what will be CBD industry look like in the next 12 months.

This information does not constitute medical advice and it should not be relied upon as such. Consult with your doctor before modifying your regular medical regime. Our websites content is provided as a service; all content is solely for informational purpose only and is intended to facilitate communication between you and your healthcare provider. We do not represent in any manner whatsoever that the content of our website contains the opinions of a healthcare professional.